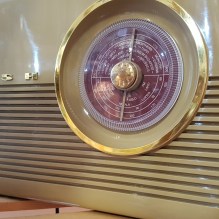 The 1960’s iconic Bush radio was such a huge success at the time, that the design made a recent come back with a modern equivalent on the inside, but almost exactly the same on the outside.

We just love how trends and fashion come in and go out, almost like the ebb and flow of the tides.

Bush was founded in 1932 with the name ‘Bush’ originating from their Shepherds Bush studio.

The 1950’s saw the production of the popular DAC90A and DAC10 radios launched along with the distinctive design of the TV22 television.

The Bush TR82 transistor radio was launched in 1959 and is regarded as an icon of early radio design.

Its as beautiful today as it was back then!

Are you the milky bar kid?

Wickham Village History as we know it…

Get all latest content delivered to your email a few times a month.