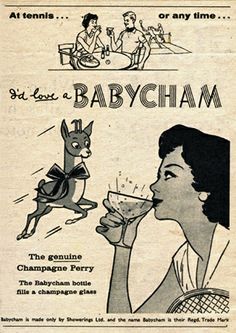 Probably not the drink of this period, although it still has its dedicated followers… Babycham was the post-war drink for the young fashionable lady. Until Babycham came along, there was few light or glamorous drinks, and none to speak of that was fashionable.

Babycham was first served as Pear Perry (Pear Juice)around about the 1940’s and soon gained in popularity around the 1950’s to get its name ‘Baby Champ’; ‘Baby’, named after the tiny bottles it was served in and ‘Champ’ as it was served as Pear Champagne. Winning all major agricultural shows, it was a huge hit in the 1950’s and was the single most significant innovation in the drinks industry ever and it was around this period the iconic deer became associated with the product.

The drinks brand was so iconic it was the first ever alcoholic drinks brand (and the second ever brand) to be advertised as a commercial on television in the UK. Babycham offered a sweet sparkling drink, more specifically for women that was fun and stylish and was a cheaper alternative to that of champagne.

It is still loved by many even now, although it has become the drink that you Nan might drink, and as such, does not have the same appeal to the young and fashionable of this era.

Collectors of Babycham merchandise are frequent and snap up what vintage drinking glasses and deer ornaments they can find to add to their collection. We tend to get a few products consistently in the Market, so it is worthwhile checking in.

Wickham Village History as we know it…

Get all latest content delivered to your email a few times a month.